Yesterday while reviewing reports I ran across an interesting error in the Inspiratory Volume (VI) from a DLCO test. I’ve probably seen this before but this time I realized what effect it could have on DLCO. Specifically, what I saw was that at the start of the DLCO test the subject had not finished exhaling and although the technician had started the test, the subject continued to exhale. 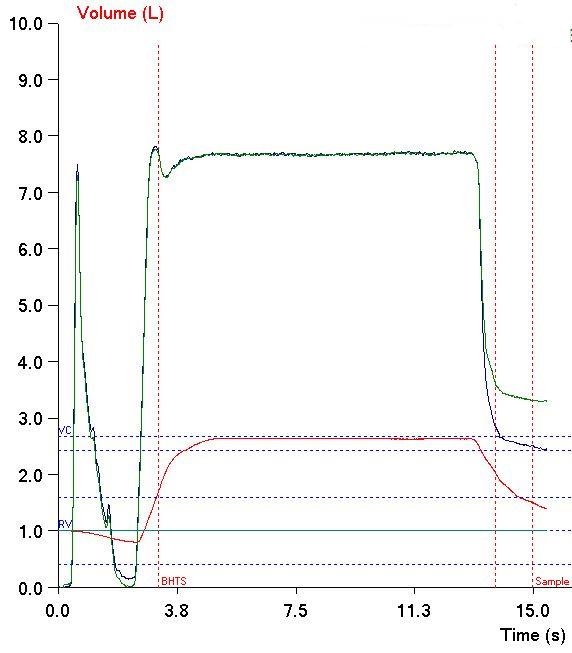 What makes this interesting is that the software used the subject’s volume at the start of the test as the initial volume. This means that the software measured the VI from the initial volume to the end of inspiration, not from the point at which the subject stopped exhaling to the end of inspiration. This also means that the VI was underestimated by 0.20 L and this affects both VA and the calculated DLCO.

VA is calculated by:

Plugging in the original test values this is:

When the VI is adjusted for missing volume, it becomes:

which is a difference of 0.45 L and a 12% increase. As a reminder, the DLCO calculation formula is:

Given that BHT, Pb, PH20, FATrace, FiTrace, FICO and FACO are unchanged, then the increase in VA would in turn cause an increase in calculated DLCO of 12% as well.

There is an opposite error in inspiratory volume that unfortunately we see more frequently than we’d like. Specifically, the expiratory valve in our test system’s manifolds often closes too slowly or leaks slightly and when this happens subjects often leak at the beginning of the breath-holding period. 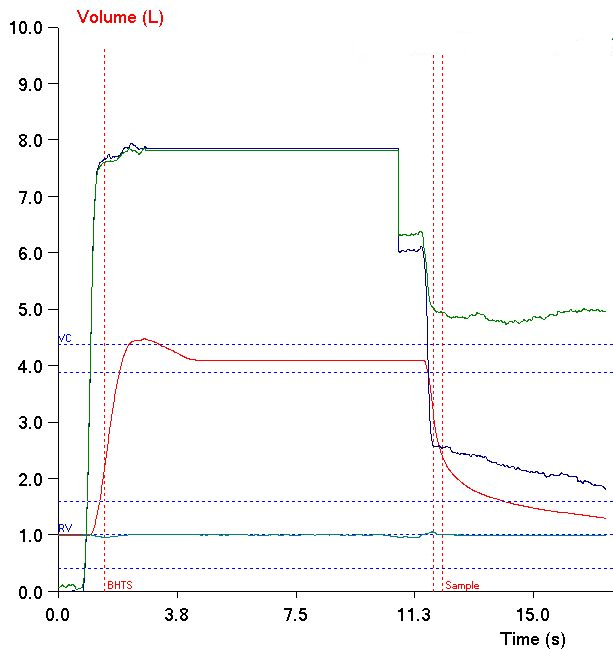 The whole point of an adequate VI is to ensure the subject’s lungs are near TLC and at their maximum surface area during the breath-holding period. DLCO normally tends to decrease when the maximum inspiration is below 90% of TLC so an inadequate VI can cause DLCO to be underestimated. Interestingly however, even though most of the breath-holding period is at a lower lung volume which would normally result in a lower DLCO it will instead be higher than would be expected.

VA is a critical part of the DLCO calculation and as already noted is calculated from the VI and the ratio of the inhaled and exhaled tracer gas concentrations. To some extent the exhaled tracer gas concentration requires a certain amount of breath-holding time in order to be for it to be distributed homogeneously. The actual time needed for this to occur differs from subject to subject but individuals with normal lungs or restrictive disorders like Pulmonary Fibrosis will probably achieve a homogeneous concentration of tracer gas relatively quickly. For these subjects the reported VA will likely be whatever the lung volume was at the end of the initial inspiration.

For individuals with airway obstruction however, even the standard 10 seconds of breath-holding time is not sufficient for equilibration and when this occurs, the exhaled tracer gas concentration will probably be more in line with the lung volume that was present during most of the breath-holding period. For this reason, VA will still be overestimated due to the falsely elevated VI but not so much due to the dilution of the tracer gas.

Either way, VA will be overestimated but the subject actually spent most of their time at a lower lung volume. When breath-holding occurs at volumes below TLC, KCO (the rate at which CO disappears from the lung), tends to increase. This increase in KCO generally correlates with decreases in lung volume but not necessarily predictably or even linearly. Even so, given the combination of falsely elevated VA and a possible increase in KCO, DLCO will probably be overestimated in these circumstances.

Whether the Inspiratory Volume was underestimated or overestimated, it wouldn’t have been evident if I hadn’t taken a close look at the the volume graph from the DLCO test. I review the raw data for all DLCO tests performed in my lab so I routinely see these kinds of problems. Many reviewers however, only see the final report and either don’t or can’t see the raw test data. I’ve seen reports from dozens of labs around the United States and only a small number had a DLCO graph on the report and even then, it is almost always very small and any problems with the VI probably wouldn’t have been noticeable. The 2017 ERS/ATS DLCO standards mandates the presence of a DLCO graph on DLCO reports and if you’re going to implement this it makes sense to make sure it’s large enough for the details to be evident.

As importantly, although we report the VI along with the DLCO results, not all labs do. I think this is a mistake because it’s helpful in ensuring DLCO test quality to a reviewer. More than that though, since the ATS/ERS spirometry interpretation guidelines say that the FEV1/VC ratio is supposed use the largest VC from any test. Occasionally I find that the VI (which is an IVC) is larger than the FVC or SVC and knowing this can make a difference in the interpretation of spirometry results.

7 thoughts on “The effect of errors in Inspiratory Volume on DLCO.”